TeamUP co-captain Adam Luke is the youngest member of TeamUP yet. At just 8 years old, he’s showing the world how the condition known as Spina Bifida (and, more specifically in Adam’s case, L3 Myelomeningocele) can’t stop his quest for a happy, activity-filled life. Supported by his loving family and the Spina Bifida community, Adam inspires and captivates wherever he goes. Learn more about this unique condition in our next installment of our 5 Questions blog series in an interview with his mother, Kellie Luke.

1. Can you explain what Spina Bifida is and how it affects your family?

Spina Bifida is a pretty broad name for a birth defect with many variations. Adam has Myelomeningocele, which basically means his spinal cord was on the outside of his body in utero which caused nerves to be damaged. He has paralysis around his ankles down and wears Surestep SMOs and Allard KiddieROCKER®s to walk independently. Adam’s diagnosis did bring some challenges into our family, but it also brought so many blessings such as a new community of friends & an increased appreciation for life.

2. What is the one thing you’d like people to know or understand about Spina Bifida?

Spina Bifida is NOT a death sentence. It is NOT a lifetime of pain. It is NOT a poor quality of life. It is merely a birth defect that changes a few things in their life — just another definition of normal. Why fit in when you were born to stand out, right?

3. Are you involved with any Spina Bifida-related groups or organizations?

Adam just turned 8, but he’s been involved in the Spina Bifida and other Special Needs communities since he was one year old. We’ve always tried to make sure he always knew other kids his age, kids a little older than Adam and adults with Spina Bifida so that he never felt alone & had role models to look up to. We are members of our state’s Spina Bifida association and recently I became a board member. I also founded and manage a Facebook support group for Louisiana parents of children with Spina Bifida. I also help run a group for newly diagnosed expecting parents & parents that have undergone fetal surgery closure. Having a community and educating others is vital.

4. How have Allard products helped with Spina Bifida? What kinds of activities have they allowed Adam to do?

Adam has paralysis from below the knees and wears Surestep SMOs and Allard KiddieROCKER®s to walk independently. He first began with his Surestep SMOs and Allard KiddieGAIT®s.  This combo brought about a more natural gait and increased speed with his walking. He also built a lot of strength in his quads and core also by using these braces. He has had a history of subluxed (dislocated) left hip since he was 9 months old, for which he’s worn a pelvic splint to sleep to help keep it in place. We began using a SWASH® brace shortly after beginning the KiddieGAIT®s and he loves how this brace allows him to move in bed easily while still keeping his hip stabilized.

5. What would you say to other people living with Spina Bifida or other mobility challenges?

Only God truly knows what the future holds for that baby diagnosed with Spina Bifida. They are all completely different; they say it’s a “snowflake condition” because no two people with the same lesion have the same functional status. Therefore, physician and therapist prognoses of future abilities are merely hypotheses and educated guesses. Many doubted Adam could ever be where he is today. He is defying the usual and expected functionality of a kid with a Myelomeningocele lesion at the third lumbar region. The best advice a doctor gave me when Adam was a baby was to let him show us what he can do and don’t put a limit on him. 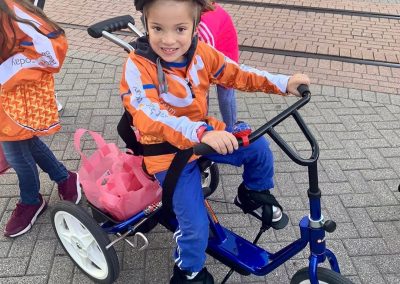 Adam on his trike 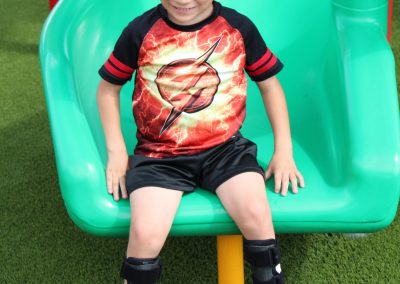 Adam on the slide 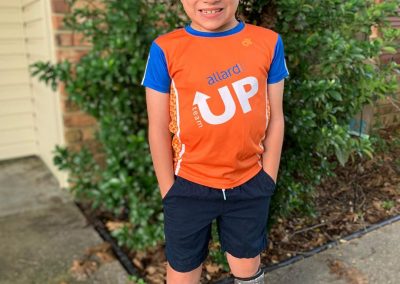 Adam in his TeamUP jersey