If you asked me all the sports I used to play, it might be easier to tell which ones I didn’t play.

From my first love of trail running and marathon races, I branched out to mountain biking, rock climbing, equestrian, skiing, snowboarding, and yoga. I’ve been an outdoor enthusiast my entire life, and I was so fortunate to explore so many different passions. My whole life was defined by living a physical life — I even earned my bachelor’s degree in exercise physiology, graduate degree in Physical Therapy and practice as an outpatient orthopedic physical therapist.

So you can imagine the shock to my system when I sustained a spinal cord injury while practicing acro-yoga (acrobatic yoga) that left me partially paralyzed from the neck down. I fell directly onto my head, compressing my spinal cord at C6 in my neck. Outside of my basic fears of whether I’d ever walk or live a normal life again, I felt as though my identity as an athlete was gone forever.

Despite my background as a physical therapist, I did not know the long-term impacts of my injury, nor did I know how long it would take for me to go through the rehabilitation process just to lead a “normal” life again. This injury was just as mentally debilitating for me as it was physically — I had just gotten out of a long-term relationship and no longer had the ability release to stress through physical activities.

I spent almost a month in a rehabilitation center, getting back the pieces of my motor skills bit by bit. Slowly but surely, I was able to regain some of my strength and balance, but I still had significant trouble coordinating the right side of my body, especially right lower extremity when walking. As a physical therapist, I thought I could continue my rehab to improve my quality of gait and efficiency. While my spinal cord injury left me unable to run, I was confident that I could overcome it. 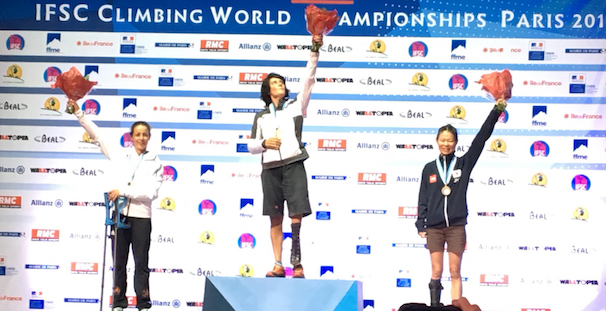 During my hospital stay, I discovered a fantastic non-profit organization of outdoor adaptive sports enthusiasts called Paradox Sports. This group gave me the courage and means to finally return to climbing and begin living my outdoor life again, approximately 3 months after my accident. Pretty soon, climbing became my entire world again while focusing on my rehab and returning to work. I started competing in adaptive climbing competitions, which provided me the opportunities to represent Japan at the 2014 and 2016 Para-Climbing World Championships in Spain and France!

I wasn’t excited about the idea of living life with some sort of assistive device, so I initially powered through and began living my life again. However, I noticed that I was having trouble keeping up with my adaptive climbing friends on long walks in Spain and also difficulty walking on uneven terrain with frequent falls, and I knew I had to explore some other options. I was also discouraged when people frequently offered me wheelchairs at airports because of my poor gait quality. This has really impacted my self-confidence, especially as a physical therapist trying to improve patients’ quality of movement, yet my movement/gait was not the best quality and felt like a hypocrite. 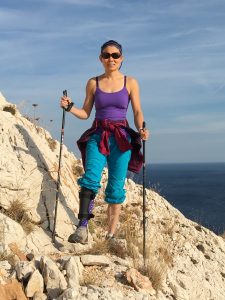 Eventually, before a visit to see my family in Tokyo (I was born and raised in Japan), I knew I had to find something that would allow me to walk longer distance to enjoy my vacation without stumbling through a very pedestrian-heavy city. I began researching various AFOs (ankle-foot orthotic) and eventually discovered the ToeOff® through my former physical therapy professor, Dr. Kathy Martin.

Rock climbing has been one of the absolute best things for both my physical and mental health, giving me an outlet to overcome my injury and meet other athletes like me who refuse to let their disabilities define them. I’ve even gone on to found and launch the first formal adaptive climbing group here in Indianapolis, IN, where I currently live. It’s just the first step in helping to spread the word of adaptive climbing to as many people as possible. I want to give others the opportunities that I have and show anyone that it’s possible to Get Back Up Today.

Outside of spreading the adaptive climbing mission, my next big challenge is to head out on a big wall like El Capitan in Yosemite. It might sound crazy to some, but my dream is to wake up and watch a sunrise from a portable ledge hundreds of feet in the air!