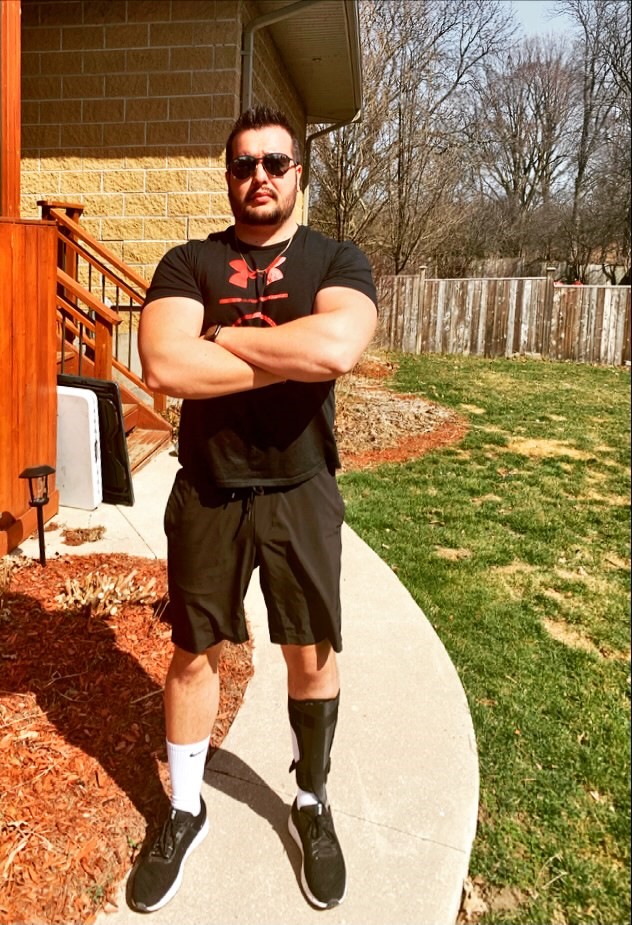 In September of 2019, Andrew Faull was playing soccer with friends when he stepped onto the ball and rolled forward where the heel of his soccer cleats got caught in the grass.  His leg hyperextended and he instantly saw black.  He tried to stay standing, but his leg bent and he fell to the ground.  He had suffered from a fully dislocated knee, torn ACL, PCL, MCL, LCL, a torn hamstring bicep tendon and he severed his peroneal nerve which caused foot drop.

Between the foot drop and having had a full knee reconstruction, it was difficult for Andrew to walk and he would have to lift his leg higher so that he wouldn’t trip.  Small things like putting on socks and shoes were nearly impossible.  As a result, he moved from taking part in sports and physical activities to becoming a spectator.  This was especially difficult when he couldn’t coach soccer or participate with friends during summer activities.

He didn’t have many options to deal with his mobility challenges.  He tried different things, like ankle support straps he got at physiotherapy.  They helped to keep his foot up and improved his condition slightly but not enough for him to feel comfortable walking and running.  It was suggested by his knee surgeon that he consider a rare nerve transfer surgery to help restore foot function.  Andrew decided to undergo this surgery in hopes that he could resume his active life and pursue a career in policing.

In February 2020 he had the surgery, and with constant physiotherapy, stimulation, and time, he was told a year later that the surgery was successful.  He has since been able to move his index toe until he could pull his foot back slightly and he has continued to make small progress with his foot activation and use.  However, even with the nerve transfer, he still has foot drop, which makes it difficult to walk and wear various shoes.

He has since been fit with an Allard AFO and that has been the change he needed.  “Since getting the Allard AFO it has changed my life in so many ways!  It has given me back so much that I lost.  I can now walk around confidently knowing my foot drop isn’t noticeable or even an aspect of my everyday life anymore.  Especially in the gym its been nice to have the trust back in my foot doing different activities.  Going out with friends has become more of a relaxed event now that I’m not focusing on not tripping and what others are thinking.  Now I can enjoy my time out with friends and not worry about my foot drop.”

Since Andrew was a kid, he has always wanted to be a police officer and giving back to his community has always been a part of his life.  In fact, he has structured his life in preparing for law enforcement through jobs in security and youth justice reform, volunteering at food banks and coaching children’s soccer.  His hero’s, as a child, were not Superman or Ironman, they were police officers.

“With the injury came a lot of doubt with my future as a police officer but with the help of the ToeOFF ® 2.0 I can continue to chase my goals of becoming a police officer.  Currently, I am in the final stages of the hiring process for Canadian border service agency and hope to be working with them in 2022.” – Andrew Faull