Lilly Markusch was 19 years old, a Division I college athlete at the University of Nebraska on a cross country and track scholarship. Her entire life was running and competing at one of the highest levels in college athletics. Then a freak accident changed her world forever.

The captain of her track and cross-country teams during high school, Lilly was a consummate competitor. In addition to running, she played soccer for 12 years, was a swimmer and a dancer. Her dream of earning a scholarship to a Division I college came true when the University of Nebraska signed her to run cross-country and track for the Big Ten program.

One night during her sophomore year, Lilly attended a fundraiser event for her business fraternity. During the event, another person accidentally fell on her, shattering the tibia and fibula in her left leg. Lilly underwent surgery to repair the broken bones and shortly after was able to return home to Denver, Colorado for Thanksgiving.

It was during that holiday vacation that Lilly realized something was wrong. “I’d never broken a bone before so I really wasn’t sure what I should have been feeling after surgery,” says Lilly. “But it felt like somebody was repeatedly hammering on my leg for six straight hours. After being home for a couple days, I couldn’t move my toes.” 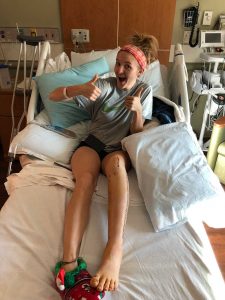 As fate would have it, Lilly happened to have a routine doctor’s visit scheduled while she was at home. The doctor saw her swollen leg and immediately sent her to the ER where she was diagnosed with acute compartment syndrome, which results from pressure building up in the area where trauma has occurred, decreasing blood flow and depriving muscles and nerves of needed nourishment.

Lilly didn’t realize it at the time, but her meeting with the doctor that day saved her leg. “The doctor told me that if I had come to see him a day later, I probably would have woken up from surgery without my leg,” says Lilly. “Instead, they were able to open my leg completely for four days to allow it to decompress and to get the oxygen flowing to my muscles.”

Unfortunately, while her leg was saved, her calf muscle died and surgeons were forced to remove two-thirds of the muscle below her knee. Lilly was told that it would be next to impossible for her to run at the collegiate level again.

“I had never been through anything like that and I didn’t know that muscles didn’t grow back,” says Lilly. “I thought maybe I could go through stem cell treatment and it would help, but in the end I had developed Foot Drop and had to learn to walk and run all over again.” 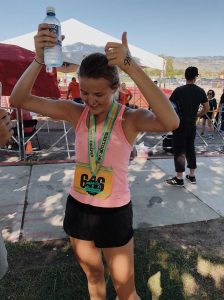 she remained resilient and determined to run again. About three months into her rehabilitation, she says the reality of the situation settled in. “Probably the worst day of my life was going to my track coach and telling him I couldn’t compete in the Big Ten anymore,” says Lilly. “I was having to give up my dream of being a Division I athlete.”

Lilly says her support system of family, friends, teammates and athletic trainers helped her through that difficult adjustment period. She remained with the team as a manager until she graduated in 2020 and was able to maintain her close connection to her best friends on the team.

Today, Lilly is once again competing. She recently transitioned to using an Allard ToeOFF® AFO and says she’s now running 20-30 miles per week in addition to doing cross training. In 2019, she completed the Tri-Boulder, her first-ever triathlon, and has her sights set on other triathlons once the coronavirus subsides.

As for the future, Lilly has new dreams of completing a marathon, an Ironman and perhaps becoming a Paralympian. “I’m a big believer that everything happens for a reason,” she says. “Even if you seem completely lost and don’t know where to go next, you just have to keep pushing through. Sometimes, what seems like a bad break can lead to a better opportunity and a chance to achieve something you never could have imagined before.”