In August of 1997, when I was 11-years-old, I was hit by a car while running on the sidewalk to transfer city buses in Downtown Honolulu, HI. This accident led to both of my legs being broken, a broken pelvis, traumatic brain injury as well as being in a coma for a month. I also had to have surgery to remove my left kidney and spleen, while having a rod inserted into my lower right leg, after months of my tibia not healing, as well as a metal plate being fused to my pelvis and lower back.  After waking from my coma, I was unable to walk for some time, but I was determined to Get Back UP! 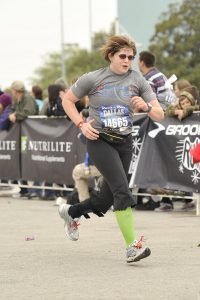 Within four months I was not only able to leave Shriners Hospitals for Children, in Honolulu, but was able to do so with the assistance of a walker.  After several months in intense rehab, my mother and father decided that it was important to be near extended family, to assist with my further recovery, so we moved to Lindale, Texas.  Prior to my accident, both of my brothers and I were very active in team sports like soccer, basketball, baseball/softball and I was even involved in ocean paddling, which involves paddling an ocean canoe with an outrigger, when I was in Hawaii.

After we moved back to Texas I knew that I wanted to be active like this again no matter how hard I had to work.  During my mission to become active again, I was fit with a hard, plastic brace to assist with walking and moving around.  While I was able to walk with this brace, its limitations, doctors telling me that I had to limit my activities and being diagnosed with peroneal nerve damage and foot drop in my left leg, I began to believe that I would never be physically active again.

That is until I went to Canada to obtain my first master’s degree at the University of Toronto, in museum studies, and was housed right across the street from the school’s athletic center.  During this time I became involved with indoor cycling and even went to a triathlon meeting.  After being inspired by others in this meeting who also overcame challenges, I was hooked and ready to find a way that I could become more active. 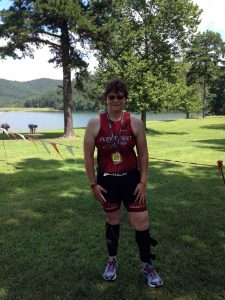 After returning home to Texas in December of 2009, I found the Allard BlueRocker™, an advanced ankle foot orthosis (AFO), which began my journey to my current passion – running and orthotics.  Thanks to a combination of surgeries, physical therapy and my BlueRocker brace, I have had the opportunity to compete in four half marathons, one full marathon, a few sprint distance marathons and two Olympic distance triathlons.  I even play rugby and am going to begin training for my first IRONMAN triathlon.

Best of all, I am going back to school for my second Master’s Degree and this time I am focusing on prosthetics and orthotics so that I can show others that they can still have an active life, even with a condition like foot drop.  The Allard BlueRocker has given me a reason not to give up and to continue to push my abilities to succeed at everything that I choose to do, and I know that if I can share opportunities like this one with others, they will have every reason not to give up.