In November 1982 when I was 20-years-old, I was cutting down a huge tree. Suddenly, the tree split into two halves, fell down, and pinned me in between the two halves. This broke three of my lumbar vertebrae, bruised my heart, and crushed my left wrist and face. I was told I would likely never walk again, and if I did, it would be with all sorts of assistive technology to aid me in doing so. This was the beginning of a life full of getting back UP.

After a month of paralysis from the waist down due to the swelling around my spinal cord, the feeling in my legs returned, which prompted my doctors to describe my recovery as miraculous. I spent three and a half months in the hospital and another four months in a rehabilitation center. I suffered a few lingering issues, foot drop, and a ton of back pain. I’m lucky to have survived and even more blessed to have recovered as well as I did. But there was never a doubt in my mind that I would get back to my old form.

At the time I wore one of the old white hard plastic braces, which I found completely intolerable and kicked it to the curb (I went without an AFO from 1984 until 2014). Flash forward two and a half years. I was still recovering when I happened upon the Wide World of Sports coverage of the 1985 Hawaiian Ironman Triathlon. I knew immediately that this was something I had to do. I set my sights on a quarter Ironman that was scheduled six months out.

To know me is to know that I never back down from a challenge. As the event neared, I was in no way, shape, or form ready, but I forged ahead and completed the event. That was just the beginning. In 1986, I entered my first triathlon. I came in dead last, but everyone I spoke with afterwards said I received the largest round of applause. It’s a memory that still serves as inspiration, and I keep the race results on my desk as a reminder that nothing is impossible.

Life was pretty normal over the next 14 years, and I did several more triathlons, 10K’s, and bike races. Then life threw me another curve ball. In the summer of 1999 I contracted bacterial meningitis. My life had taken another sudden left turn and I was again faced with the possibility of not living through a life crisis. 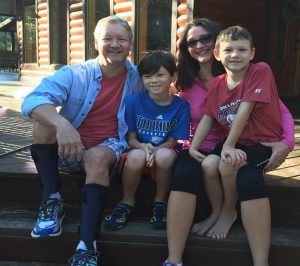 If I thought a tree falling on me was painful, it paled in comparison to some small bacteria taking control of my body. I knew this was a challenge I was up for, but it left me six months out of work with a long and very difficult recovery. I managed another comeback, though. The recovery from that left me in more pain and with a few more lingering neurological deficits in my lower extremities. I persisted with my riding, but had to give up triathlons.

A year later I was sitting in an airport in Salt Lake City travelling back from a sales trip, when I noticed the waist of my slacks were wet. Upon further inspection, I discovered it was some bloody fluid that was leaking from my lower back. One neuro consult and an MRI later, we discovered that I was actually leaking Cerebral Spinal Fluid (CSF). Not the greatest news for me as I was just getting my life back on track. Surgery was a necessity as the hardware in my back that I had carried around for years had been the cause of the leak and it had to come out.

The surgery went better than expected and did not take as large of a toll on me physically as my doctor had expected it to. But I ended up needing more surgery and contracted another bacterial infection (pseudomeningocele) that resulted in another six months out of work. Since that time I’ve never been the same physically speaking. I ended up losing more function in my lower legs, and it looked like my cycling and athletic days were over

Life continued to hand me lemons. In my mind there is never a choice except to forge ahead, set new goals and challenges, and live as an example to others that face life’s adversities. So I continued to make lemonade.

As much as I would have loved for life to stop handing me challenges, it still had yet another card to play. Over the last couple of years, nagging pain in my right foot would come and go and eventually showed no signs of going away. It gradually progressed in severity, duration, and I started to notice that my footdrop had become more pronounced in addition to an increasing amount of muscle atrophy in both my lower extremities. 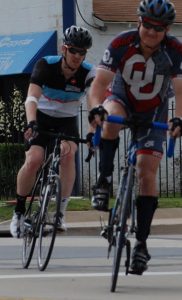 In February 2014 my neurologist gave me a life changing diagnosis I was not prepared for – a rare and incurable disease called Arachnoiditis. Now, I’ve been in the medical field since graduating college in 1990, but I had never heard of this one. When your neurologist hangs his head and says, “I’m sorry,” you know you are in for a rough ride ahead.

The disease in a nutshell is characterized by swelling of the arachnoid tissue that cuts off the blood supply to the spinal cord and ultimately this kills the nerves. The result is a pain that would keep the toughest man on earth down on a consistent basis. Since there is no cure, those affected are treated with a variety of medications that in most cases have little effect on the chronic pain. In all likelihood I will end up paralyzed from the waist down at some point.

Honestly though, I consider this just another minor speed bump, because I have accepted that this is my life. How I choose to live it will directly affect those around me. I have a happy marriage and two super kids, and I now focus on living my life as a positive example for my family and those individuals that face adversity in their lives. I can’t say that I was happy to get my most recent diagnosis, but the days that have followed have been impactful and not without their positive moments.

You can choose to sit on the sidelines or you can find a way to get back in the game. And that’s just what I did once my neurologist prescribed bilateral AFOs. I set a goal to start doing triathlons again. I researched AFOs and told my orthotist I wanted the ToeOFF. He recommended the BlueRockers for me, and the rest is history. Once they arrived and I put them on, it brought me to tears. I had not stood taller or walked better since that tree fell on me and changed my life forever.

I bought a new bike and started riding again and haven’t looked back. I’ve discovered para-cycling, and recently placed second in the Oklahoma State Time Trial Championships. I’m already making plans to attend the Para-cycling Nationals Championships next year. Ironically, the only time I am not in severe pain is when I am riding my bike. I thank God for this little miracle. When I got my BlueRockers I was forever changed in the best way possible, because I regained the part of my life that had meant so much to me – athletics. I truly got back UP and got on the move. 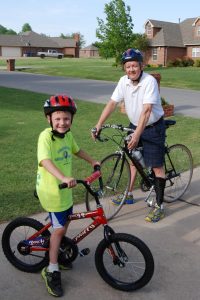 As a final note, a major positive development is that my eight-year-old son now has the cycling bug, and recently placed third in his age division at the Oklahoma State Time Trial Championships. I couldn’t be more proud and more motivated to continue inspiring those around me. Things could always be worse. The fact that I get UP every day and show my kids that anything is possible is really what drives me.

We have a saying in our house, and my kids know it all too well: “We don’t say I can’t; we say I’ll try.” Each time my kids say ‘I can’t’ this is my response back to them. I do my best to live a life by example, not excuses. I’m reminded of the quote on the Team UP website, “Fall seven times, get up eight.” I’m at five, so bring on the others and I’ll keep standing tall.