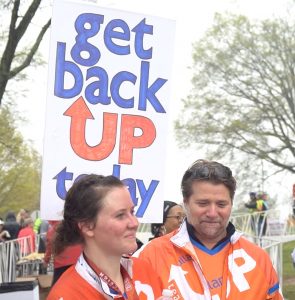 Life is one big adventure after another. That is how I am treating my disability. Almost three years ago, my husband was stationed in Guam while in the Navy and I was over there with him. We were living life to the fullest; mountain biking, running races, hiking, exploring, and had even recently qualified for the world championships of XTERRA, the off-road triathlon.

I was sitting at home alone one night while my husband was still at work when there was a knock at the door. Being the outgoing and slightly naïve person that I am, I answered it. There were three very tall, big, angry men at the door. As the only one home I tried to defend the homestead, but three men with a gun trump my one person. One of the guys took that gun, hit me over the head with it and beat me so badly that I was left on the floor to die for a couple of hours. That’s when my husband and our roommates came home. They found me just in time.

They got me to the hospital where the doctors induced a coma that lasted for three days. When I finally woke up I couldn’t swallow, talk, or move my right side at all. I was completely paralyzed, and I had nothing but faith and a hilarious attempt at communicating to get me through. From that day onward, I was determined to get my movement and speech back completely. For the past three years, I have been working on those goals.

One of the first things the doctors noticed was that I was going to need a brace for my lower right leg/foot. They outfitted me with a hard plastic brace. It allowed me to walk again, but that’s about it. It was very medical-looking and as silly as it may seem, I felt like a medical experiment wearing it. I began doing research on what brace I could run and bike in before I could even walk unassisted again. My husband Sam joined me in this endeavor. Finally, we found the Allard BlueROCKER® and then I found GetBackUPToday.com, where I connected with athletes who had challenges like me on TeamUP. 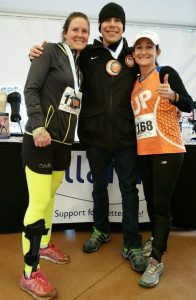 Walking, eating, and speaking an understandable language are all second nature to most people, but I had to relearn all of these basic actions. The BlueROCKER® gave me one less thing to worry about while I made these significant adaptations to my life. It allowed my amazing physical therapist to focus on my balance so that I could build up my endurance, get back up on my bicycle, regain my proper gait, and continue my running.

Three years after that horrible night, I am competing in triathlons again, getting ready for my XTERRA comeback (someday I’ll go back and compete in XTERRA Guam again) and running all over the place. I wear that brace everywhere. After I got fitted with my BlueROCKER®, my right foot felt more mobile. The combination of the brace and Challenged Athletes Foundation’s Paratriathlon Camp reignited the fire of athletics in me. I could finally start to be active again.

There are certain points in life that change you. This was that point for me. I was just becoming a true competitor in the world of triathlon when I was shaken to the core. I did not know how to live with a disability. No one I knew had ever competed with a disability before. I’d never even heard of hemiplegia, and now I have it. But with my Allard BlueROCKER®on my foot, a right hand that can at least hold on to a bike handle for dear life, my grant from Challenged Athletes Foundation, and a coach that pushes me to be the best I can be, I am not just alive – I am living again. Life really is one big adventure.