My son is a talented athlet 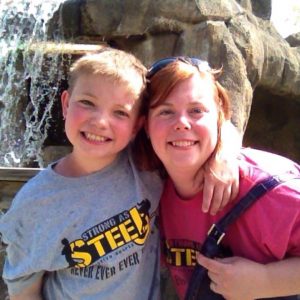 e, holding national records in discus and long jump. He loves to sing and loves being outdoors. He is a caring brother and a loving son, and can be extremely sweet (when he wants to be!). He is also a pediatric stroke survivor! I’m guessing that some of you were surprised to read that, but it’s true, kids can and do have strokes.

When my son was a baby we noticed that he wasn’t using his right hand and that when he did eventually begin to crawl, he held that hand fisted and in an awkward position. His doctor told us he was just left handed and not to worry, but we were first time parents so worrying was sort of our thing. When he eventually was diagnosed, it rocked our world.

It was quite a transition adjusting to special needs parenthood. The appointments, the schedules, the specialists I had never heard of (physiatrist… is that really a doctor, or am I making that up!). No one walks you through this new world and introduces you to the people you need to know, there is no tour guide in the land of special needs parenting. What is an AFO? And also where do I get one? The physical therapist recommended a brace, or a hand splint, but I have no idea how to acquire these items. Dorsiflexion, supination, complex partial epilepsy… the strange language kept swirling around me, and I felt clueless! People kept saying words and they clearly assumed we were talking the same language, but I was not yet fluent in special needs parent at that point and would go home and diligently look up words and acronyms and try to understand how they related to my child’s care.

It felt like we spent those first many years living in therapist and doctor’s offices. Physical therapy, occupational therapy, speech therapy, each twice a week or more, and don’t forget vision therapy (yes, this exists, who knew!) and hippotherapy (this is done on a horse rather than a hippo, who knew?). We ate meals in the car running from one appointment to the next. Along with a laundry list of specialists. Life was pretty chaotic and sadly, didn’t leave much time for living!

We realized pretty early on that things were going to be challenging for our son. That he would often be tempted to give up, to let someone do it for him, or to just not bother trying. To counter this, we came up with a family motto, Claytons Never Quit! Whenever he would comment that something was too hard, or he couldn’t do it, we would remind him that “Claytons Never Quit!” and give him a bit of help to get the job done!

As my son progressed and was eventually discharged from all of his outpatient services, there was finally time for us to explore some other endeavors. My son was interested in running and so we figured out how to get involved in adaptive sports. Once again, I felt like I was thrust into a world where I didn’t understand the customs or the lingo. The first year was a challenge, and a major education for me, but we survived it and we learned invaluable lessons.

His first year competing, he competed in the 60 meter, 100 meter and 200 meter races. He was only 7 years old when he competed at his first regional meet and he qualified easily for the National Junior Disability Championships! We decided to make the trip to NJDC where he won gold in all of his three races, learned a lot about adaptive sports, and made some new friends. While running a particularly hard race he told me afterwards, “I just kept reminding myself that Clayton’s Never Quit!”, what a joyous moment seeing it all come together! On the way home from the meet, he started talking about starting an adaptive sports team in our area and Strong as Steel Adaptive Sports was born on that long car ride.

At the moment we are preparing to attend our fourth NJDC, this year in Ames Iowa. My son has expanded his horizons and now swims, runs, jumps, throws javelin, shot put and discus and shoots archery! It will be a busy week at NJDC for him but also a lot of fun. When we started this special needs parenting journey, I never would have imagined being the co-founder of an adaptive sports team, I never would have imagined all the things my son can do, or all the things I would learn! Sure, things are hard for him, yes, he falls down (sometimes a lot), and it absolutely took him longer to learn these skills than it took most kids. But he is doing it, he is putting himself out there, he is smiling and trying and never giving up! I can’t ask for much more than that!