Craig Vogtsberger: I’m a Stay-at-Home Dad with a Disability

Speaking with TeamUP co-captain Craig Vogtsberger today, you might never know he suffered a traumatic injury so severe doctors didn’t know where to begin.

After being crushed between two Humvees during a training exercise in the National Guard, Craig was uncertain he’d have any kind of life beyond a wheelchair and prescription pain medication.

Now, almost 20 years later, Craig is not only an award-winning XTERRA para-athlete, he’s a busy stay-at-home dad and husband. From his home in Colorado, he maintains a packed schedule between his three children and career as an avid triathlete.

But life as a stay-at-home dad has its share of struggles and challenges.

“From the very basics of walking up and down stairs, to picking up my daughter, to cooking in the kitchen, I am always reminded of my mobility issues,” Craig says. “My daughter loves to play in the yard or run through the house—which I love, too—but I’m constantly working on myself on how to adapt, overcome and compensate. To make my disabilities be a blessing and help me live a better life with my family.”

While Craig may relish the time he gets to spend with his family, he says not everyone shares his enthusiasm.

“You get passive aggressive comments, a lot of negativity. And being disabled just adds a whole other element,” he says. “People look at you like your ‘man card’ has been taken, that you’ve lost your masculinity because you struggle to walk or speak.”

Being a stay-at-home parent means keeping up with the laundry, cleaning the house, cooking food, running the kids to practice or games. It’s a full-time job and then some.

And like any job, it has its own obstacles that are only compounded by Craig’s disability. If his injuries flare up or slow him down, they often get “pushed aside” for the greater good of the family.

“You focus on your family and the kids, because they’ll always come first,” Craig says. “And so you take care of yourself the best you can.”

Combine the stigma Craig often faces as a stay-at-home dad with the stigmas people living with a disability face, and “it’s a double whammy,” Craig says.

For a long time, Craig says he didn’t consider himself to be disabled. No matter how severe his injuries were, he never stopped telling people—including his doctors—that he would get better. But eventually, his injuries got the better of him, and he fell into a “very low moment” where he realized he would never be a police officer or serve in the military again.

“There was one point when I was at my worst, sitting in a chair on medication, and it was just impossible for me to admit how bad off I was,” he says. “I had a brain injury, my vision and hearing were poor, I even had trouble walking the dogs.”

It was at this point that he began to accept his disabilities, choosing instead to ask himself if that were the case, what was he going to do with his life?

“It took me several years to get out of that low point where you actually realize you are disabled. And you may get better and cope and adapt, but you’re always going to have those challenges to face,” Craig says.

Many years—and many XTERRA triathlons—later, and Craig has found a way to channel his challenges into a productive, fulfilling life. Though he competes in the PC (“physically challenged”) division of his races, he notes with a grin that he often finishes before many people in the non-PC divisions.

Throughout his journey, Craig has always had one motto: Never give up. 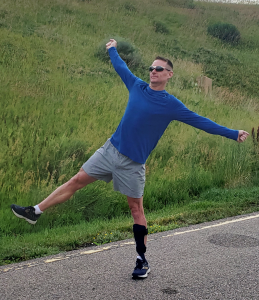 “It doesn’t matter if you’re just sitting on the floor, and you can’t move except one arm to play Peppa the Pig or GI Joe with the kids, you do what you can,” Craig says. “If you can’t run around on the playground, you push them on a swing. Do whatever you can, because the biggest limitation anyone has is their own mindset.”

And just as importantly, Craig encourages others to never look down on themselves for their disability or their inability to do “normal” activities. You might hit a limit, sure, but that doesn’t mean other doors or opportunities won’t open up if you look for them.

“I’m disabled, and that’s OK,” Craig says. “I will always do everything I can to build the life I want and spend time with the people who mean the most to me.”