I stood on the side of the mountain looking back to how far I had come. I was tired, exhausted, and in pain. I was done. Standing here, the incline was so steep, I could only place part of my boot in the snow. I’m glad I had the trekking poles. Those and my good leg were the three points holding me up on the steep slope of ice and snow. My core muscles and hips, which mostly move my left leg, were beyond fatigued.

Getting this far couldn’t have been possible without my BlueROCKER®. I like saying that, because everyone wonders what is a BlueRocker. It is an advanced ankle foot orthosis (AFO) from Allard USA. Having foot drop and a partially paralyzed leg doesn’t make things easy. Especially, trekking up a mountain on a steep slope of snow and ice. I continually wondered if I’d make it to the top. It is only a 13,000-foot peak. I knew it might be hard, but not this hard. The guide stopped to help another climber with a minor medical issue. I no longer had someone to follow. It is easy to keep going when I was two steps behind him, following in his exact footsteps. Now I was on my own, at least for a while. 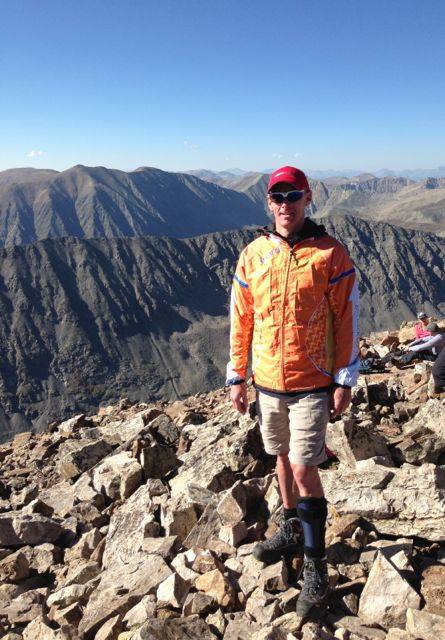 On my best days it can be difficult and hard to move around. Today, standing in the snow and ice, was even worse. I don’t quit. “Whatever it takes,” I usually say. I turned toward the false summit and continue up. I reach the lead group of three sitting on a few exposed rocks. Knowing how hard it is to move on level ground, I see the loose slick rocks and become worried. It will be very important to step on the rocks without slipping or falling. At this altitude in this weather, it would be hard enough with two legs that worked, but I only have one that totally works.

The sun continues to peak out from behind the clouds warming everything quickly. We strip off layers to keep from overheating. Then it disappears behind the clouds and we quickly throw on more layers to stay warm. The wind is blowing, which is good when the sun is out, but makes it a lot colder when the sun is hidden behind the dark clouds. One of the guides cautions me about the rocks. I step carefully leaning over and holding onto the rocks with both hands. I finally find a rock to sit on that is somewhat level. I take a long drink of water and eat a snack. We still have a long way to go.

I sit there on my select rock and look at the other team members. We were all selected to be part of the Soldiers to Summit: 2014 Mission Mt. Whitney. S2S helps disabled veterans shatter personal barriers and reclaim lives by using mountaineering as the learning tool for setting ambitious goals, building world-class teams, innovating through obstacles, and stepping up to lead and serve others.We are on our first training session heading up to the top of James Peak in Colorado.

I didn’t know what to expect. I was excited for the training in the mountains of Colorado. Most of all, I was excited to have a new experience that I could share with other Disabled Veterans. Most of us have what is known as the “hidden” injuries from our military service. Some of us have seen combat, some of us never stepped foot in a combat zone, but all of us suffer.

It’s been 13 years since my accident in the military left me with numerous physical and mental diagnosis, injuries, and disabilities. After the accident I was told I would never run again, much less walk, due to Traumatic Brain Injury (TBI), incomplete spinal cord damage, nerve damage, and a partially paralyzed left leg with foot drop. Seven years later I was shown the BlueROCKER®. I have been running ever since and I have brought my mile times from 10 minutes and beyond, down to 7-minute miles on my good days. So naturally I had to push my limits. If I can improve that much with running, then I can climb a mountain. My disabilities and injuries have taken me on a long ride through life. It has had its ups and downs — a lot of downs — but I always get back up. When you are disabled you don’t want to stand out, you feel insecure and you want to hide. You don’t want to be stared at and thought not “normal.”

This training session with Soldiers to Summit has made me feel confident and self-assured around others with similar experiences and similar lives. I look back and I found something on the mountain. I found something that makes my life worthwhile and worth living. It is the feeling I had when leaving the mountain. It wasn’t a high or low feeling, but satisfied. I accomplished something. I had, once again in my life, overcome the suffering and pain. I had pushed through the mental and physical fatigue and the mind telling me to quit. I had continued on. I didn’t quit. Who would ever understand my journey except those I did it with?

The struggle was made easier knowing I had the guides looking out for me. I opened up to them about my struggles, which I rarely do in life to anyone on that level, but on the side of the mountain I felt safe. I felt I could share and they actually cared.

Several times I found myself a step or two behind a different guide. I walked in their steps in the snow, knowing I would be ok if anything happened and knowing that I didn’t want to let them or anyone on the team down.

I could do it, I knew that, but I had to accept the pain and suffering before, deal with it while it happens, and be ok with it afterwards. Everything I do from sitting in a chair to racing in a triathlon to climbing a mountain has to be weighed before, during, and after as to the degree that I am willing to suffer and be in pain. I constantly weigh the cost of mental and physical recovery.

What is worth all that? I found the answer to that, on the drive down the mountain: living.