Just a few years ago I had an entirely different career path in mind until one night changed the course of my life forever. On October 16, 2006, while serving in the Navy, I suffered a massive stroke. The scariest part is that I was all alone when this experience took place. While I was fortunate enough to have shipmates that noticed my absence the next day, it was 14 hours after the stroke began before they found me lying on the floor of my home and called the EMTs.

After lying in a coma-like state for about a week, I woke up to find out that I not only had a stroke but would have to learn how to walk and talk again. I was also suffering from a condition called hemiparesis, which caused partial paralysis of the right side of my body. I also suffered from aphasia since approximately 70 percent of my brain was affected by the stroke. Despite feeling like my world was caving in around me, I refused to give up on the life that I had built. Besides, I was scheduled to deploy for my fourth tour of Iraq and Afghanistan in a few months.

Within a month or so, I came to realize that the goals for my future would have to change. Especially, when the Captain of my Naval ship walked in my hospital room and told me that I wouldn’t be joining my crew in the upcoming tour. I was crushed and left wondering…what am I going to do now?

Before I knew it, I was saying goodbye to the naval life that I had known and loved for 16 years. Despite retiring as a Lieutenant Commander with an honorable discharge, I couldn’t help but feel lost.

Little did I know it at the time, but I was about to be given a new path to life. The most difficult challenge was finding a way to walk normally due to the development of foot drop. The first step would involve getting up and moving again. After months of physical therapy, I eventually moved from a wheelchair to a hard plastic brace with the assistance of a walking cane. Although using a hard plastic brace and cane was helpful, with my right side remaining paralyzed, I continued to have a difficult time walking.  However, these difficulties have not  stopped me from finding a new way to get active. 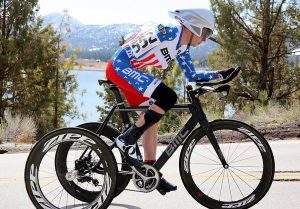 About six months after my stroke, I was introduced to the Wounded Warrior Project, who knew that I wanted to continue to do something meaningful with my life. After learning that I once had a passion for cycling, where I would regularly ride up to 200 miles a week, they obtained a recumbent bike that would allow me to ride despite permanent paralysis. I rode this bike for about six months before deciding that I wanted something a bit faster. So I got a bigger and better recumbent bike. After riding that for about a year, I topped out and decided that I no longer just wanted to ride for fun, but wanted to compete as a professional cyclist.

In order to do so, I not only needed to find a unique bike but an ankle foot orthosis (AFO) that would help me have a range of mobility and become a more competitive cyclist despite having foot drop. A little bit of research eventually led to both an upright tricycle as well as my Allard BlueROCKER® brace.

Although I started off slow, I soon launched a second career in triathlons and cycling. Within four years following the stroke, I was not only a world champion cyclist but accompanied Team USA in London for the 2012 Paralympic Games. Although I didn’t medal, this was one of the most amazing experiences and it even gave me a chance to return to another passion – traveling the world.

A couple of years after this, I began my own coaching service, called Peace Cycling Performance to help others discover their passion. I also recruited and coached 14 ne

w trike riders for our own team of tricycle riders, which includes TeamUP co-captain and 2016 Paralympic silver medalist Jill Walsh.

As I have continued to compete, I have seen my mobility and attitude improve and when I am not racing or riding, I can be found running my coaching business, as a Level 2 USA Cycling Coach. Before my stroke, I never thought of competing at this level.  Now, you just put it in front of me, and I’ll do it.

I am so grateful to all who supported me during this difficult time in my life. If it wasn’t for people like my mother and father, fellow naval officers, US Military Endurance Sports (my current cycling team), cycling colleagues and folks from Allard USA, I wouldn’t be where I am today.

So, despite what life may throw at you, go ahead and live it to the fullest and remember that a new start may be right around the corner. 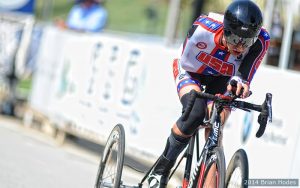