I used to think I was invincible.

That was, of course, until a chance accident left me without the use of my left leg. Little did I know that I would soon begin a three year-long journey to even get a proper diagnosis of my injury—let alone return to an active, physical life.

For me, staying in motion was crucial to my sense of identity. From spending my weekends hiking, surfing and mountain biking to competing as a serious gymnast from the ages of six to 23, my entire life was based around being active. When I “retired” from gymnastics, I immediately fell into running, working my way up from 5Ks to half marathons to full marathons. Before long, I had run both the LA and Austin marathons.

In 2008, I was offered the job of my dreams: coaching young gymnasts in the tropical paradise of Bermuda. Not only would I continue to be involved in a sport I loved dearly, I would be doing it close to crystal blue waters and pink sand beaches.

Three years after my arrival in Bermuda, I was heading to work on what the locals call a “bike” (Americans would recognize it as a motorized scooter). It was the main mode of transportation on the island, and I had gotten used to navigating the streets on two wheels. But everything would change when a car failed to see me coming, pulled out in front of me and crashed into my bike. The wreck left me pinned underneath my bike, and as I came to, I realized something was seriously wrong with my left leg.

I was unable to control my leg in any way, leaving me unable to stand up straight. Despite the Emergency Room’s initial diagnosis of only having a sprained ankle, I knew that my injury was far more serious.

After two weeks of confusion and pain, the parent of one of my students (who was a doctor) referred me to a sports medicine doctor who then referred me to a neurologist. Their diagnosis was that my sprained ankle was in fact a spinal cord injury, and that I needed to immediately leave my position as a gymnastics coach to prevent further injuring myself. 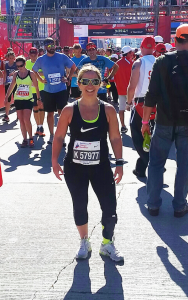 After this grimmer diagnosis, I left Bermuda for my hometown in Oregon. It was here that I began a surreal journey from doctor to doctor, specialist to specialist, desperately looking for someone to provide me with the right treatment. Each doctor was more confused than the last, unable to provide any solution more viable than a clunky, uncomfortable walking boot.

It wasn’t until I saw my 25th doctor—yes, you read that correctly—that I was properly diagnosed with an incomplete spinal cord injury at L4 and a spinal syrinx in my neck. Although I retained feeling in my left leg, I had no ability move it, along with a debilitating weakness in my upper body. Additionally, injury to the involuntary muscles in my leg meant I had no blood circulation in that leg, which now requires me to wear compression socks on a daily basis. Otherwise, my foot turns purple and ice-cold.

It was after that breakthrough diagnosis that some of my hardest physical therapy began, leading me to eventually regain the use of 75% of my upper left leg. This diagnosis also led me to being prescribed my first Allard ankle-foot orthosis (AFO) brace.

Finally, I was in good hands and on my way to real recovery. In fact, the very same day I put on my first ToeOFF® brace, I went for my first jog since my injury! I called friends and family with tears running down cheeks. Gradually, I began adding to my runs mile-by-mile until a few months later I completed a half marathon in Provo, UT. 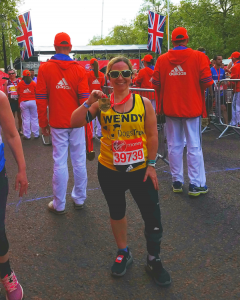 After I got used to my new life with my AFO brace, the list of what I could not do started to become shorter every day. And while I do miss gymnastics and high heels (I’m only 4’11”!), my new life as a dedicated runner is bringing me a sense of purpose and joy. In fact, I’m even back to coaching gymnastics and fitness classes—something I never dreamed would be possible in the years after my accident.

But even as I list the things in my life I miss, there are an equal number of things that my new life has given me. I’ve been able to go places I never thought imaginable, meeting so many inspiring people along the way. Qualifying as a disabled runner, I have been fortunate enough to travel all across the world for races in New York, Chicago, London and Berlin. I’m also preparing for the Tokyo Marathon in early 2018, which will be my last race to complete the World Marathon Majors series! If I finish that race (fingers crossed!), I’ll be the first disabled runner with a spinal cord injury to finish that series on foot.

People often ask me if I would go back and stop the accident from happening. For me, the answer is a resounding “no!” I’ve learned and grown so much as a person and have gained such a unique perspective on life that I could not imagine giving up. I wouldn’t trade the experiences and the people I’ve met to my have my leg working again—not in a heartbeat.

So what’s next for me? I’m working on a book about my journey that I hope to finish someday. I’m also set to climb Mount Rainier next summer—maybe I’ll set my sights on Mount Everest after that? 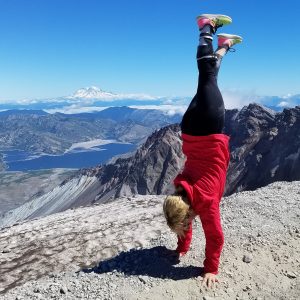 Whatever I end up doing, I know that it will be with a zest for life that I never believed would be possible during the three years I spent bouncing from doctor to doctor. But even in my darkest days, I never lost sight of the finish line. The words of figure skater Scott Hamilton—who faced his own battle to “get back up” from cancer—were always in my head: “The only disability in life is a bad attitude.”

I never knew that his words would apply to me so directly, but I also never thought I’d be traveling the world as a marathon runner.

But with the right outlook, maybe we are invincible after all?