5 Questions About Dystonia with Todd Hart

TeamUP co-captain Todd Hart lives with a neurological muscle movement disorder known as dystonia. According to the American Association of Neurological Surgeons, it affects nearly 250,000 Americans, and there is no known cure. Find out more about this painful condition, and how Todd is working to help spread awareness and support for dystonia and those living with it.

1. Can you explain what dystonia is and how it affects your life?

Dystonia is a neurological muscle movement disorder where a person’s muscles contract uncontrollably. In essence, the brain is telling the nerves to fire muscles at an accelerated rate, in the opposite direction. And the subsequent muscle contractions causes a person’s affected body part(s) to “twist” involuntarily. This results in abnormal postures and/or repetitive movements. Dystonia can affect one muscle, a muscle group or the entire body. Unfortunately, dystonia has no cure. However, there are a number of treatments, depending on the type of dystonia one has.

Dystonia has affected me to a much greater extent than cancer and chemotherapy ever did. It affects me 24/7. It’s permanent, it can be debilitating, and you are in constant discomfort from the muscle contractions. My dystonia is in the right foot and is more than likely caused from nerve damage that occurred during my cancer surgeries. I require a series of three botulinum toxin (botox) injections every 12 weeks in my right calf, which allow me to walk. These shots alleviate the majority of the cramping. The botox travels down the nerves, and eliminates the nerves firing the primary foot muscles. Outside the constant cramping, most of my daily activities are unaffected. I am able to walk practically normally. If I desire to run or jog however, I require the support of an AFO.

I am extremely grateful to enjoy the quality of life I currently have, because many others that are afflicted are not as lucky. Having dystonia has opened doors allowing me to participate in various communities and support groups I otherwise would not have been exposed too.

2. What is the one thing you’d like people to know or understand about dystonia?

Dystonia is the third most common muscle movement disorder behind Essential tremor and Parkinson’s disease — but most people have never heard of it. And I was one of those until I was afflicted. I would like for more people to understand that regardless of the debilitating movement disorder, most of the time the cause of onset is unknown and there are no known cures — only treatments such as botox, deep brain stimulation (DBS), surgery, medications and physical therapy.

3. Are you involved with any dystonia-related groups? How so?

I am involved with two dystonia groups. The first is the Greater Cleveland Dystonia Support Group, which is a regional collection of people afflicted with dystonia and their families. The group meets quarterly with agenda topics such as discussing how to cope with dystonia, mutual support and encouragement methods, responses to various treatments and research paths. We also invite local doctors to speak on these topics, too.

The second is the Dystonia Medical Research Foundation (DMRF), which I financially support. Their mission is to advance research for more treatments and, ultimately, a cure for dystonia. They also work to promote awareness and education, as well as support the needs and well-being of affected individuals and families.

4. How has your Allard AFO affected your life? What kinds of activities does it allow you to do?

While my Allard AFO does not necessarily help with dystonia, it does provide me with the support and control I need for running. As soon as I put it on, it’s instant confidence. Without it, I am not able to run.

5. What words of advice or support would you pass along to someone who is living with dystonia or any other mobility-related challenges

If someone is willing to talk about their mobility issues, I would first want to know how they cope with them. It’s been my experience that the mental challenges of trying to establish an “acceptable” quality of life can be more difficult than the disability itself. When there is no cure for the given affliction — such as dystonia — one has to accept that prior to “moving on.” Most of all, I would hope to be a source of support and positivity for them, as those are often the most important things to help us along our journey. 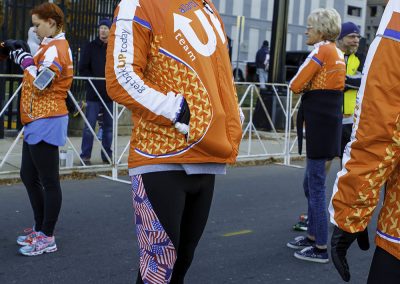 Todd Hart decked out for a race in Charlotte, NC. 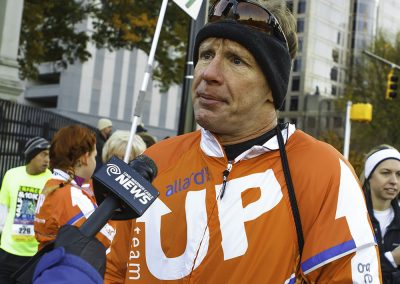